He Turned the Water into Wine (Johnny Cash) 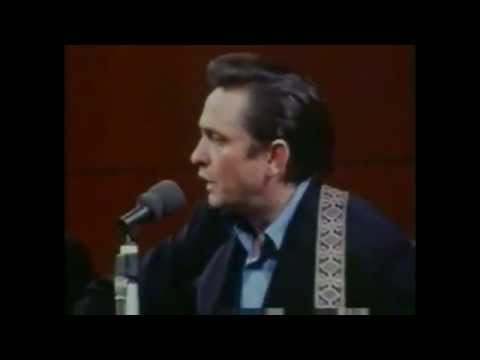 According to Johnny Cash, he wrote the music and words to this song during a 1968 tour he and his wife June Carter Cash did in Israel. He explained to the crowd at San Quentin: "We went into the little town of Canaan just over the hills from Nazareth and there's a church that sits over the cistern where the water came from that Christ turned to wine, where the first miracle was performed. We went into the church, saw the cisterns; you can hear the sounds of the water in there, hear the echo. I was so impressed when I came out of the church. If I ever had an inspiration I had one then from seeing what I had just seen and heard. And I said under my breath, 'He turned the water into wine,' of all things. On the way to Tiberius in the car in the next few minutes, I wrote this song."

In John 2:1-11, Jesus performs this miracle at a wedding banquet after his mother tells him there isn't any wine left. He resists doing anything at first but follows her wishes by changing the contents of six stone water jars, each with a 20-30 gallon capacity, into wine. Unaware of what had occurred, the director of the ceremony tastes the wine and tells the bridegroom: "Everyone brings out the choice wine first and then the cheaper wine after the guests have had too much to drink; but you have saved the best till now." (source)